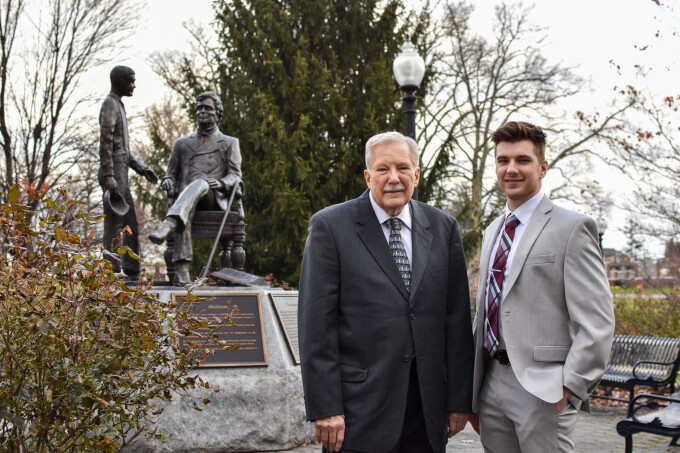 Loyalty and commitment run deep in the Pettis family. To family, to values, to workplace culture and goals, and to Thaddeus Stevens College of Technology (TSCT). Especially to TSCT, given credit by a grandfather and his grandson — both alumni — for developing the skills and philosophy for them to pursue satisfying careers while supporting a family and comfortable lifestyle.

Steve Pettis may have been the first in his family to attend Thaddeus Stevens College, but he wasn’t the family’s first connection with the college. A generation earlier, his stepfather Philmore Dyer, a printer who owned Lancaster Photo Engraving in downtown Lancaster, supplied the college with plates and cuts used to print pictures and illustrations.

“He was instrumental in getting me into Stevens Trade School (later renamed Thaddeus Stevens College),” said Steve. “He knew I was interested in printing and helped steer me to work in the industry.”

“I got a job with Forry and Hacker located on Liberty Street in Lancaster. My first job was to melt down the lead lines of type from previous printings. The metal was poured into molds to make bars of metal called ‘pigs,’ The pigs were then remelted in the Linotype machines to cast new lines of type for new printings.”

“When I turned 16, I was taught to operate hand-fed presses,” he said. “Those presses were used to print small jobs like business cards, postcards, and envelopes.”

Steve’s son, Ronald Pettis, began his career following in his father’s footsteps and working for a printing company. While he did not attend Thaddeus Stevens College, he developed a connection to it.

“I was working in cybersecurity at a printing company with an alum when I was asked to address computer science classes at Thaddeus Stevens College in 2018 and 2019,” said Ronald.

Grandson Shawn Pettis, who grew up in Millersville, is the latest generation of the family to attend Thaddeus Stevens College. Shawn received a degree in business administration (BUAD 14).

After graduation, Steve joined LNP full-time and worked in print production. He was involved in the development of the equipment and worked through the switch from linotype to electronic typesetting (hot to cold type).

“We were part of the industry’s testers. The managers liked to get the equipment in and test it, and I was involved in the development and modification of manufacturer’s equipment. I wrote diagnostics for some of the machines to have equipment work with the other parts,” said Steve.

“If the equipment is running good, it’s like I don’t exist,” he said. “There were times I actually slept there because I was working on a problem.”

Steve recently retired from LNP after spending 54 years with the company. When he retired in June 2020, both his college and his employer recognized him for years of dedication and service.

“I had the honor of presenting my grandfather with an award from the Thaddeus Stevens College Alumni Association,” said Shawn, who is a member of the college’s Board of Governors and the Alumni Association and Foundation. “This award was presented to him in recognition of 54 years of commitment to the industry. That was a highlight for me, to present him with something on behalf of the whole college,” he added.

“I knew I had an aptitude for entrepreneurship and l wanted to pursue marketing or business solutions, to get my feet wet and see how a two-year business degree could help me toward future plans,” said Shawn.

“When I found out that 98 percent of Thaddeus Stevens College grads are employed upon graduation, that was very impressive,” he said. “I knew the college produces high-caliber graduates desired by local industries.”

Shawn said his Thaddeus Stevens College professors were “great teachers who challenged me and helped build my background and character.” He credits them with teaching him communication skills, e-mail etiquette, and extensive Microsoft applications—all skills he continues to use daily in his job.

Shawn was honored with the Program Role Model Award of 2014 for the Business Class, and his grandfather Steve attended the award ceremony. Shawn has since returned to campus to speak to business classes, something he enjoys doing.

He attended Millersville University for a year but then chose to take advantage of a job offer as a business development specialist with Dominion Pest Control. It is the largest locally-owned pest control servicer in the area, servicing all of Lancaster and York counties, recently named the number one pest control company by LNP readers.

“Thaddeus Stevens College taught me all the skills I needed and I was really enjoying this company and wanted to stay here,” said Shawn, who lives with his wife, Lauren, in Ephrata. “They were happy with my two-year degree and I was promoted to general services manager, where I oversee the service department and general management of the company’s 17 employees.”

Earlier this year, he also became the first ever public health entomologist accredited by the Entomological Society of America, the international professional organization of professionals, scientists, and government individuals studying insect science. Shawn said the rigorous study and subsequent certification exam recognizes the role of public health-related pests and how they contribute to serious injury and death among the public.

The Pettis family credits Thaddeus Stevens College for much of its academic and career success.

“My father is my hero,” said Ronald. “His experiences at Thaddeus Stevens College fostered his talents and guided him to pursue an industry passion that ultimately led to a 54-year tenure within the same organization.

“I felt honored to have been presenting to classes where my father’s journey began,” he added.

“I’m extremely grateful for my education and career growth,” said Shawn. “For generations, Thaddeus Stevens College has been there—providing my grandfather with the skills to pursue a good, steady job and helping greatly with our family’s financial opportunity.”

“When Shawn told me he was going to attend Thaddeus Stevens College, I was totally flabbergasted—and very proud,” said Steve, adding he appreciates the opportunity the college has given Shawn to build his own career.